We herewith offer label listings for the German Homophon Liliput (12 3/4cm diameter) and Homocord Liliput (15cm diameter) issues. In issue 36 of  the Phonographische Zeitschrift, dated 6. September 1905,  Homophon Company GmbH of berlin, Klosterstrasse 5/6, announced cheap double-sided 5 inch diameter discs, allowing a playing time of 1 minute. Later that month,  in issue 39 dated 27. September 1905,  the discs are described as available: Neuheit: 5" = 12 3/4cm Liliput-Records. Towards the end of the year, issue 45 lists Liliput-Records Nos. 6, 7, 8 and 9. Issue 46 of  Phonographischen Zeitschrift also lists Liliput issues on Homophon, but no size is given. One number each side and the highest number is 42 - so they had at least 21 small children's discs for the 1905 Christmas season. Issue 6 of Die Sprechmaschine in December 1906 lists issues 6/7, 8/9, 13/14, 39/41 and 40/42; the latter two indicate that couplings were not necessarily in numerical sequence. In 1907 the Zonophon company sued Homophon, and as of November 1907 the Königl. Langericht Berlin decreed that disc records by the Homophon company had to use a different trademark and records were consequently labeled Homokord, or Homochord respectively, in order to avoid confusion. No Liliput advertisements could be found after December 1905.

After the war the label was revived by the Homophon Company under their new label Homocord. Most of the titles were originally recorded for Mignon/Lindex, and the true matrix numbers can be found handwritten below the labels. Some titles have also been issued on Pigmynette and Odeonette, with "Bm" control numbers being added. Almost all titles have been recorded acoustically, some date back to 1912. Most titles have been recorded in Berlin, but a few may be from other locations including London (LON) and Amsterdam (AMS) 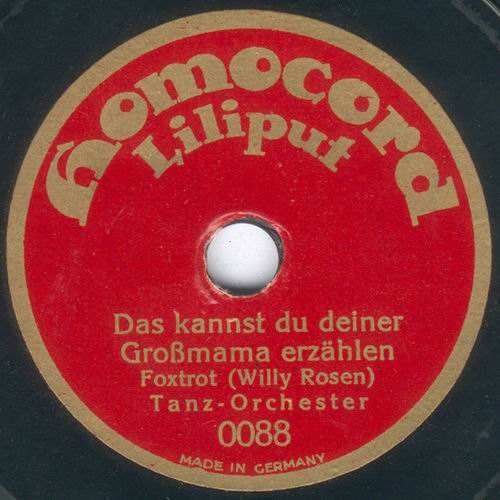 Homocord Liliput 15cm diameter discs. Attention: This is a large file which may require a long loading time. Be patient...

The basic research on dates and matrix numbers was done by Björn Englund (Stockholm). Among those who have provided further information are the following:  Deutsches Musikarchiv (Berlin), Bernd Meyer-Rähnitz (Dresden), Peter Schmelzle (Internet)

If you have additions or corrections: Please contact us by e-mail: Rainer Lotz
UPDATE: 27.07.2014