Raphael Tuck:
The only company known to have succeeded in manfacturing Gramophone Record Postcards commercially in large numbers seems to have been Raphael Tuck. Raphael Tuck was born in 1821 at Koschmin, a small town in East Prussia. In 1865 he moved to England and by the following year had opened a small shop in London, selling and framing pictures and chromolithographs, which he imported mostly from Germany. Raphael Tuck's three sons joined the business in 1870 and published their first Christmas and New Year greeting cards in 1871. One of the sons, Adolph Tuck, produced their first picture postcard in 1894 of Mt. Snowdon in Wales, which was sold to tourists at the site. In 1898 Tuck’s first numbered series of postcards was printed, a set of 12 lithographed vignette views of London. They were numbered 1 to 12 with the „Tower of London“ having the distinction of being the #1 postcard. … The Tuck Company entered the American postcard market in 1900 and maintained an office in New York. American artists designed the postcards and they were printed in Germany and England and returned to the U.S. for sale. Most records of the Tuck history were destroyed during the 1940 WWII bombing blitz of London, including the original paintings the postcards were produced from. Tuck postcards are easy to identify with their destinctive logo as „Art Publishers To Their Majesties The King And Queen”. Regular Tuck postcards are collector’s items.
Sources:

"The Romance of the House of Raphael Tuck & Sons Ltd" <http://www.scarpalbum.com/xmasp9.htm>

In 1929 Tuck went into the business of producing Gramophone Record Postcards. The English monthly journal Musical Opinion and Music Trades Review had a regular column „Gramophone Gossip“. The September 1929 issue contains the following: “Gramophone Record Postcards: Messrs. Raphael Tuck are responsible for an amusing and interesting innovation in the shape of gramophone record picture postcards. Measuring 3in., these discs play for one minute and cost 3d each.  Several series are already available, and I have heard admirable demonstrations of  „Auld Lang Syne“, „Ye Banks and Braes“, „Annie Laurie“, „Bonnie Banks of Loch Lomond“ &c.  Besides these songs there are orchestral records and cornet and saxophone solos.  One immediate result of these postcards has been the installation of portable gramophones in the smaller stations to demonstrate them!“

As all kinds of postcard designs (landscape view, greeting cards, art reproductions) turn up, and the pictures are largely obscured by the dark-brown opaque recording material. It is thus probably safe to assume that Tuck used obsolete old postcard stock as raw material for their product. The cards do look much older than 1929, and the designs hardly ever have any logical relation to the (electrically) recorded sound pasted upon them. Any recording could be pasted on any postcard – and, discographically speaking, noting details of the postcard designs would be irrelevant.

According to investigations carried out by Arthur Badrock and Frank Andrews, at this period the discs stuck upon Tuck cards were made by Worldecho, or at least the same company that made Worldecho discs. The earlier series of cards (August 1929) pre-dates the apperance of any Worldecho discs. The Worldecho company had been doing development work since the summer of 1928. Eventually, some dance band tracks by the Worldecho house band led by Leslie and Cecil Norman actually appeared on Tuck cards, circa April 1930.

A book published in 1935 states: “In the past few years, four or five companies have been floated to exploit the merits of resorcinol-formaldehyde resins applied to the manufacture of gramophone records. The idea appears to have originated in Germany, where a varnish of this nature was used during the war as aeroplane dope. It was brought to England and a public company - Worldecho Records Limited - was floated, which, after a meteoric career, went bankrupt owing to financial mismanagement. The seed, wafted to America, fell on fertile ground, and with much éclat Durium Hit-of-the-week records  appeared, and rebounded back to England as the Durium record, with two titles on one side and practically double the normal number of cuts per inch” [H. Courtney Bryson, “The Gramophone Record”, 1935; quoted by Hans Koert, "Discography: Hit Of The Week - Durium", Heinkenszand: 1999]. The material used for Tuck, although not identical to the American Hit-of-the-Week records is similar, and pre-dates the Durium acetate. The light brown or dark brown color, typically for Hit-of-the-Week records, can be changed to all kinds of colors (all though there are no red or blue or white Durium discs). A Columbia University professor by the name of Hal T. Beans apparently improved the acetate compound to make it better suitable for a „durable“ flexible record.

In the absence of recording ledgers or other factual evidence, it is difficult to identify the performers and to date the performances. The repertoire mostly consists of undateable standard repertoire pieces - folksongs, Christmas carols, marches, spoken greetings etc. No doubt this helped Tuck to avoid paying royalties. Occasional references in the press provide clues: “Tuck’s Record Postcards: The records which Messrs. Tuck are issuing in the form of postcards were commented upon some few months ago. They can hardly be regarded as a novelty now, for every month witnesses interesting additions to the fast growing list.  A new series of Nursery Rhymes has recently been issued, which should have an irresistible appeal to children, particularly as amongst the titles are those favourites of the nursery „A Frog he would a-wooing go“, Hickory Dickory Dock“, Jack and Jill“ and „Ride a Cock-Horse“. A series of dance records has also been issued recently in the form of picture postcards.  These number some of the favourite tunes of the day, and the actual reproduction is remarkable for its clearness, richness and definition. A further development of this scheme is a new enterprise known as the Commercial Gramophone Record Card, which in song and story lays stress on the virtues of well known goods and firms.  Included in this series are personal greetings and speeches from politicians and other people prominent in public life. Very moving is the appeal which Ian Frazer, the blind MP, makes on one postcard on behalf of St. Dunstan's.“ [„Musical Opinion and Music Trades Review“, June 1930 issue].

It has been suggested by researcher Steve Walker that some dance band tracks by the Worldecho house band led by Leslie and Cecil Norman actually appeared on Tuck cards, circa April 1930. However, the only cards actually identifying the performer by name are the piano solos by Cecil Norman in Series “M”. Researcher Bill Dean-Myatt thinks the baritone singer was John Thorne who recorded every type of material (except Grand Opera) for almost every label from about 1920 until 1932. The Tuck postcards were sold in envelopes which contained printed information on available series and selections, but again they only refer to categories and not to performers.

Worldecho also produced other 3.25“ advertising card/discs, presumably in association with Tuck. Those presently known to exist are included in the label listing of Tuck Commercial Gramophone Cards below. The best known among these is probably the 10x10cm cardboard advertising the Biscuit Manufacturers Huntley & Palmers, which bears a recorded message on one side and an illustrated slogan on the reverse side. Besides World Echo Tuck apparently had some business connection with Louis Boduin of France, who first entered the business in 1908 and appears to have been in business in 1929/30 as well, as some recordings used by Tuck have also been used on his LB cards. Perhaps the oddest card is the image of a black saxophone player on a disc featuring "Rule Britannia".

About 1910 German born Albert E. Reinthal and Sig. L. Newman founded an art house (to publish art prints) in New York; by 1920 their main business seems to have been art postcards. At least one “RN” card, a design by painter F. Earl Christy,  is known as a phonocard, using theTuck master P95X. It is not presently known whether such cards were specifically made for Reinthal & Newman or whether they were among the Tuck stock and recycled in London as a phono card.

Tuck`s Gramophone Record Postcards were obtainable in packets of four: "As an additional protection place the enclosed protector with Tuck's Gramophone Record Postcard in the envelope before addressing and posting". The reverse of the protector card contained printed information on available series. On 26 October 1929 Gustave and Desmond A. Tuck filed a patent specification for child's picture books that have sound records fixed to the cover or the leaves. The patent was accepted on 15 January 1931. Eddie Shaw reports these as 8" in diameter.

Adam Miller writes from New Zealand: „I recently purchased here in NZ an original box (marked R2) of 6 of them, 4 of one tune (buff cards) and 2 of another (green). The inside of the boxlid had the lyrics of one tune only (noted as R2), which was the green two. All had pasted on (different) labels which I could lift on just one of the buff ones, to see X5. It was not the one with the lyrics as printed, but had the carol "O Come All Ye Faithful" with a spoken Xmas message over the top”

The following card looks like a Tuck, but does not seem to fit in any series. Unlike the regular Tuck cards it has a label which says: "No.2 - Instrumental - Wedding March". No matrix number, but "11" is on the lower left corner on the reverse side: 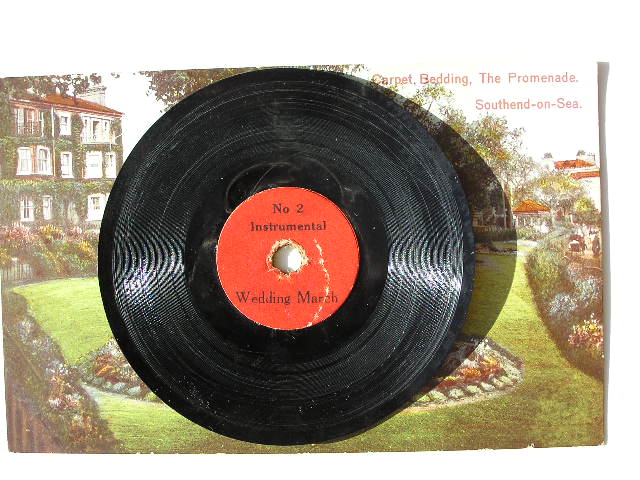 If you have additions or corrections: Please contact us by e-mail: Rainer E. Lotz